Related Articles
Freeport LNG to restart in October
The unplanned outage that took the plant offline in June highlighted the growing global importance of US LNG
US politicians up windfall tax rhetoric ante
Surging downstream profits add fuel to the fire, but the spectre of demand destruction lurks
Adnoc forgoes seasonal break
The Emirati heavyweight is racing to bring on new gas production to exploit rampant global thirst for the resource
Cote d’Ivoire’s Baleine set for fast-track development
The field will be the African country’s largest oil and gas development and revive a declining upstream that has seen almost 20 years without a major discovery
Australia mulls LNG export controls
The recent energy supply crisis has resulted in a political backlash against the nation’s gas exporters
Japan and South Korea promise little immediate LNG market relief
East Asia’s power sector use may be poised to shrink from 2023, but demand for the fuel is expected to remain strong this year
TotalEnergies targets 2027 startup for Papua LNG
Close collaboration between IOCs in Papua New Guinea means other developments may follow
US becomes world’s largest LNG exporter
And the bulk of its volumes are heading to Europe
ExxonMobil signs up for LNG from Next Decade
The deal continues the trend of developers making long-term agreements to start in the second half of this decade and is another milestone for the Rio Grande project
Guyana yields more discoveries
Two more finds have been made at the upstream frontier’s prolific Stabroek block

It was supposed to be the year in which everything was to come right for Mozambique’s LNG projects. Instead, everything seems to be going wrong.

Anadarko had taken FID in 2019 as operator of the Area 1 offshore block, before French major Total bought all its African assets. In 2018, Eni reached FID on a floating LNG project for Area 4’s fields while the onshore LNG project was taken over by joint-operator ExxonMobil, which was expected to take FID in mid-2020.

An armed insurgency started in October 2017 but did not seem a serious threat. Despite it later affiliating to Islamic State (IS) and causing humanitarian catastrophe, it at least appeared manageable for the gas projects as they are well-guarded and had not been targeted. But in just one month, all that has changed.

Mozambique’s projects are not immune to the global dynamics. In the wake of the Opec+ fallout, Wood MacKenzie stated in a note that ExxonMobil’s Rovuma LNG project would be among those under pressure.

The week following Opec+, the insurgents launched two stunning and unprecedented attacks in Cabo Delgado. They routed police and military in Mocimboa da Praia on 23 March, flying the IS flag over the town. It apparently attracted popular support—a new dynamic for the insurgency—by distributing food to the local population rather than looting and beheading, as has been their modus operandi.

Mocimboa da Praia is c.60km south of the Afungi peninsula where Total is already working on its own onshore Mozambique LNG project. Until January, workers flew from the provincial capital to the town’s airport, the nearest one to the project, before travelling by road, or if fortunate by helicopter, to Afungi.

Footage shared on social media after the 23 March attack shows soldiers surveying the remains of the airport—showcasing how close they have come to the LNG projects.

The insurgents left Mocimboa later the same day. But two days later they took another significant coastal town, Quissanga, 250km further south. At the time of writing, they were still in control of at least part of the town.

“[Covid-19 and the oil price war are] simultaneously lowering the curtains on a short-lived dream of [Mozambique] becoming a major gas province and a middle-income country in my lifetime” Mucavele, CTA

The two attacks “are troubling,” a Total spokesperson told Petroleum Economist while emphasising that “the project site remained secure at all times” and “we remain on track to deliver first cargoes in 2024”.

Total announced on 23 March that it would cut capex by 20pc, or by more than $3bn, in 2020. But the spokesperson says the company expects this will not “have a material impact on the [Mozambique LNG] project”.

However, an assessment produced by the Domestic Security Alliance Council (DSAC), an FBI-backed organisation that provides security assessments to private American businesses, and seen by Petroleum Economist, warned on 30 March that the emboldened IS presence in Mozambique poses an increasing risk to the LNG projects. It adds FID on ExxonMobil’s $30bn project would likely lead to an increase in attacks on US and Western interests.

“Insurgent attacks should be of grave concern to the Mozambican government,” says Jasmine Opperman, an analyst of the Cabo Delgado conflict now with the Armed Conflict Location & Event Data Project (ACLED).

The Mozambican military has deployed around 500 of its best trained soldiers to protect the LNG projects, she says, but this is feeding resentment elsewhere in the province where undertrained and undermotivated soldiers fail to prevent regular, fatal attacks on villages.

As Mozambique is caught up in both the global and domestic catastrophes, those looking forward to the long-awaited gas boom are looking on aghast.

Florival Mucavele, a local entrepreneur who leads the oil and gas sector in Mozambique’s main private business organisation, the CTA, tweeted on 31 March: “As we watch in horror the ravaging effects of Covid-19 and clumsily prepare… for the worst, a crude price war is simultaneously lowering the curtains on a short-lived dream of becoming a major gas province and a middle-income country in my lifetime.”

How quickly optimism can evaporate. 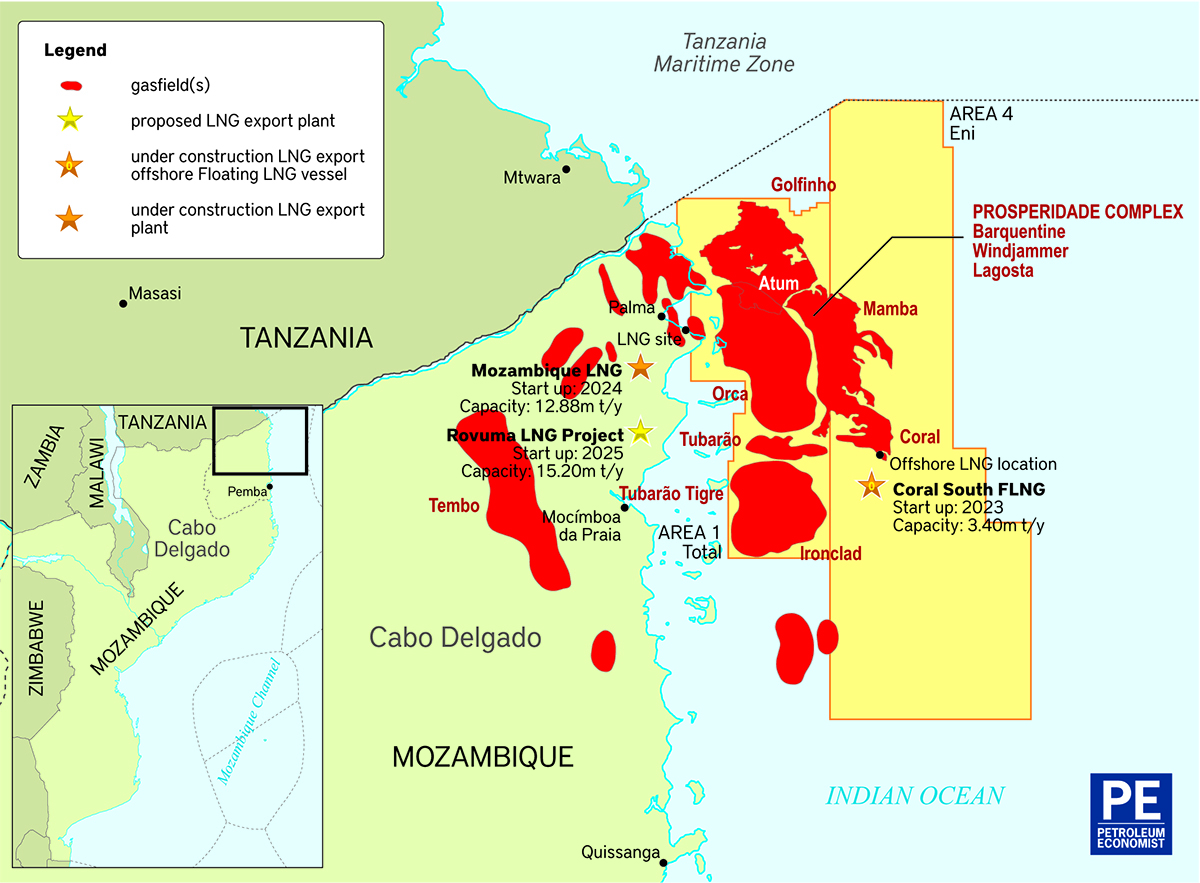