Related Articles
Kwarteng considers accelerating UK gas quality relaxation
Minister may override for now a consultation process being run by the country’s health and safety authorities
Iran casts shadow over Kurdish gas aspirations
The Kurdistan region is facing political and military challenges as efforts to appoint a government in Baghdad descend further into chaos
Algeria targets 10mn m³/d gas boost before year-end
A new Sonatrach discovery could be in initial production from November
Iran unlikely to prove a gas saviour
Any hopes that the Mideast Gulf state could increase production and exports to help ease the global shortfall are misplaced
Africa's upstream to feel transition squeeze
The continent’s oil production will decline in the 2020s while gas production will increase before starting to slip, according to the IEA
Gas may be safe in Algeria-Spain spat
The North African nation is unlikely to suspend exports in diplomatic dispute
IOG aims for Southwark gas in Q4
The UKCS independent is making progress at the third of its Saturn Banks phase-one fields
Canada’s LNG export rebirth
Europe’s ambitions for a Russian import freeze are a boon to a previously stalled sector
Australia’s gas industry under fire
The energy crisis on the country’s east coast is fuelling calls for resource nationalism
Supply blows rock European gas market
Russian reductions compound US LNG outage as continent seeks relief in the short and longer term

Gas may be safe in Algeria-Spain spat

Algeria’s early June decision to suspend trade with Spain in response to Madrid’s recognition of a Moroccan autonomy plan for the disputed territory of Western Sahara has severely hit bilateral ties. And the decision has led to speculation about Algeria’s reliability as an exporter of hydrocarbons.

This is despite the fact that Algerian gas exports to Spain have been unaffected by the crisis. In fact, Algiers knows full well it would be shooting itself in both feet were it to end gas deliveries to its closest European neighbour.

The crisis underlines what a tough juggling act Algeria is trying to pull off. While drawing a red line on Western Sahara—where Algiers supports full independence rather than Rabat’s more modest proposals—Algeria is looking to capitalise on Europe’s efforts to diversify away from Russian gas.

To do so, Algeria will need not just to prove it can still be counted on as a reliable gas supplier, but also to raise production if it is to boost export volumes.

The practical reason why Algeria has refrained from halting gas exports to Spain is economics. Algerian gas exports to Spain came to $1.8bn—and represented over a quarter of the North African country’s total gas exports—in 2020. Algeria would not be able to deliver all supplies originally earmarked for Spain to alternative buyers solely through its existing pipeline infrastructure.

Algeria supplied Spain with 15.8bn m³ of gas via pipeline, as well as 2.4bn m³ of LNG shipments, in 2021. With a total capacity of 30bn m³/yr, the Trans-Mediterranean (Transmed) pipeline does not offer an alternative route to deliver all of this gas to non-Spanish consumers in Europe, given it already pumps at least 19.5bn m³/yr to Tunisia and Italy.

Additionally, the pipeline has reportedly already absorbed gas diverted from the 8bn m³/yr Maghreb-Europe gas pipeline to Spain via Morocco—following Algeria’s October decision not to renew its delivery and transit contract with Rabat. Spain's Algerian pipeline deliveries in the first four months of this year have been just 3.8bn m³ compared with 5.65bn m³ in the same period last year.

Nor is an Algerian agreement to increase pipeline deliveries to Italy able to fully solve any immediate squeeze that an interruption of exports to Spain would cause.

Italy’s Eni and Algerian NOC Sonatrach inked an April deal agreeing to “exploit the [Transmed] pipeline's available transportation capacities” to boost Italian import volumes. Even if it is assumed that Eni's rather ambiguously worded statement translates to an Algerian commitment to up deliveries to Italy by 9bn m³/yr by 2023-24, that could likely be largely achieved by using all the currently available ullage in Transmed, meaning no immediate rush to enlarge it. But there would still be a shortfall between 9bn m³ extra being sent to Italy and the almost 16bn m³ sold via pipeline to Spain last year.

This lack of urgency, combined with Algeria’s mixed track record of pipeline upgrades, suggests that, even if Sonatrach and Eni eventually foresee capacity expansion, it is unlikely to be quick. Nor is there any guarantee that the extent of their ambitions will be realised.

The late ’00s increase in Transmed capacity—ironically in response to another Russia-Ukraine gas dispute in January 2009—was delivered relatively quickly but still missed an end-of-year target and delivered only about half the targeted capacity increase. That crisis also briefly reinvigorated enthusiasm for the proposed 8bn m³/yr Galsi pipeline to link Algeria and Italy via Sardinia; almost two decades after its 2003 launch, that project is still no nearer to fruition and is largely considered a dead duck.

LNG could offer a technical solution should Algiers still decide to divert gas earmarked for Spain to other customers in Europe or beyond. However, Algeria’s ageing terminal infrastructure and inadequate shipping capacity make it unclear by how much LNG deliveries could be expanded.

While the option of cutting gas exports to Spain is impractical, it would also undermine Algeria’s status as a long-standing, reliable supplier to Europe. Algeria would almost certainly lose an arbitration battle with Spain for breaching its supply contract.

Algeria would almost certainly lose an arbitration battle with Spain

Since Russia launched its invasion of Ukraine in February, European leaders have looked to Algeria as one of many alternative sources to Russian gas. Most EU states will probably be less inclined to boost gas imports from Algeria if Sonatrach were to break its contractual export obligations with Spanish gas utility Naturgy.

While Algeria is unlikely to throttle its supply of gas to Spain, it is capable of using other weapons to bring pressure to bear on the Spanish government. Sonatrach indicated in April that it is looking to hike prices for gas exports to Spain in particular.

While these negotiations are periodic and based on price fluctuations, they may on this occasion at least implicitly be linked to Madrid’s position on Western Sahara. Algiers may also be tempted to do less to deter Algerian migrants from crossing the Mediterranean to southern Europe.

Bilateral relations aside, Algeria has its work cut out to expand gas production. It will be in no position to boost exports to Europe or beyond if it fails to make large new gas discoveries and bring them onstream.

Algeria’s mature Hassi R’Mel field still accounts for c.50pc of national production, but its output is forecast to continue to diminish. Consultancy Wood Mackenzie says the field is expected to enter end-of-life decline from 2025 onwards. This is despite Sonatrach’s use of infill drilling and compression techniques to sustain production levels.

That Sonatrach has not been able to locate large new gas fields can be at least partly attributed to the tough business environment its joint venture partners have had to endure in Algeria. Slow decision-making within upstream state institutions and a history of churn within Sonatrach and the Ministry of Energy and Mining are noteworthy. That said, improved—although still suboptimal—fiscal terms are increasingly being exploited by incumbent IOCs amid high oil and gas prices.

Algeria’s ability to expand its gas volumes will also be constrained by the country’s ever-expanding domestic energy needs. Consumer demand for gas grew by an average rate of 2pc/yr between 2015 and 2020.

As demand continues to increase, a greater portion of gas production will be diverted from exports to Algerian consumers. The trend will continue until such time as more sizeable gas discoveries are made and exploited and/or Algeria’s substantial renewable energy ambitions materialise.

While global demand for gas is expected to peak around 2040, Algeria—in common with other exporters—cannot be sure about the pace at which decarbonisation will take place across Europe. But with Russian gas appearing unpalatable for most European states for the long term and rising Algerian domestic energy needs offering another demand cornerstone, Algiers should be feeling greater confidence in the solidity of its ambitions for IOCs to expand exploration and production over the coming years.

However, as with their governments, the appetite of IOCs to exploit Algerian hydrocarbons will likely diminish if the country looks to weaponise its status as a major exporter of gas over Western Sahara. 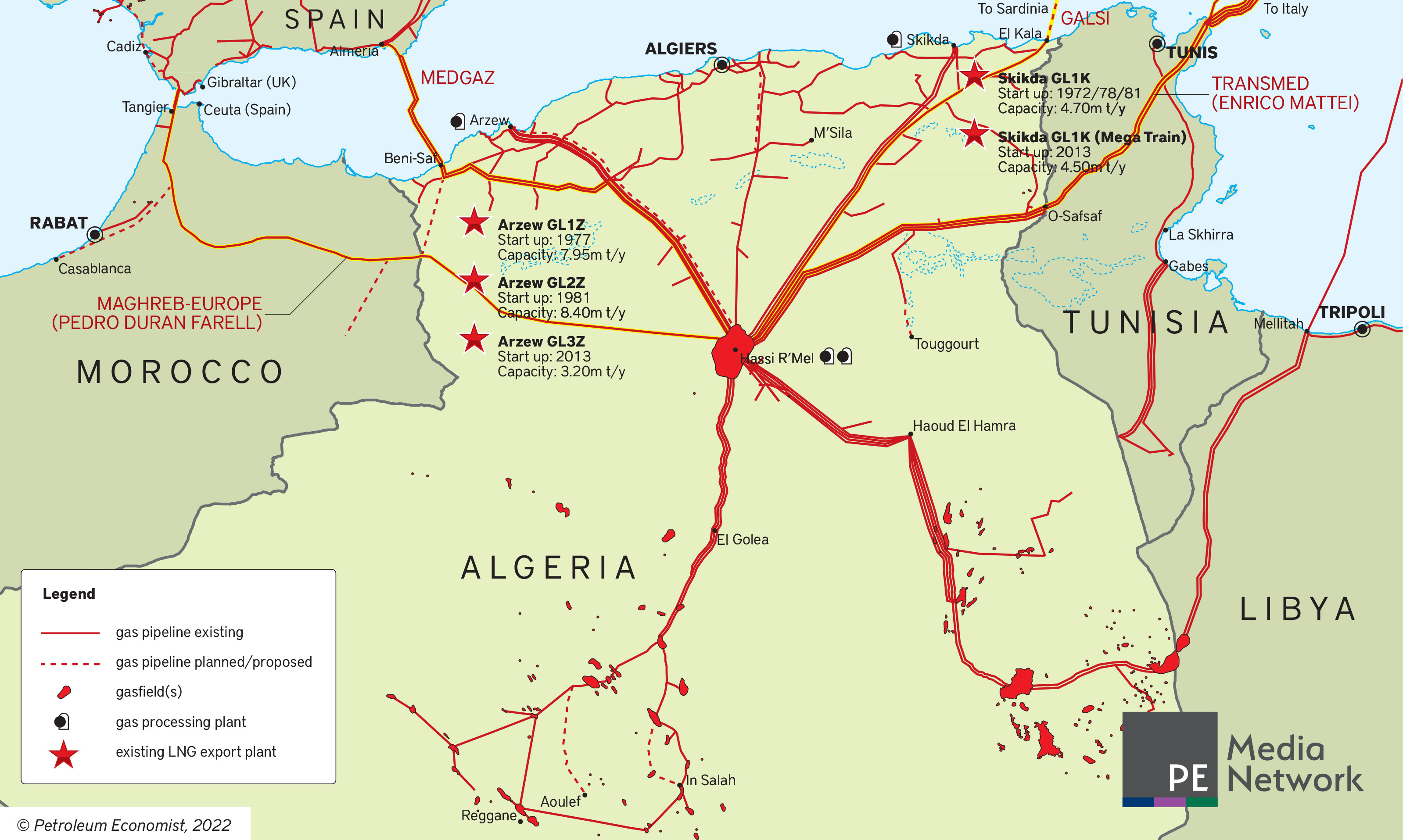